Taking the pain out of therapy research and numbers

If current thinking about left and right brain hemisphere differentiation is correct, what are the implications for us as therapists? We live increasingly in a world where we both need to ‘be’ with clients, and evidence the impact of that ‘being’. For many of us, those worlds feel mutually exclusive. Is there a way we can reconcile these divisions? 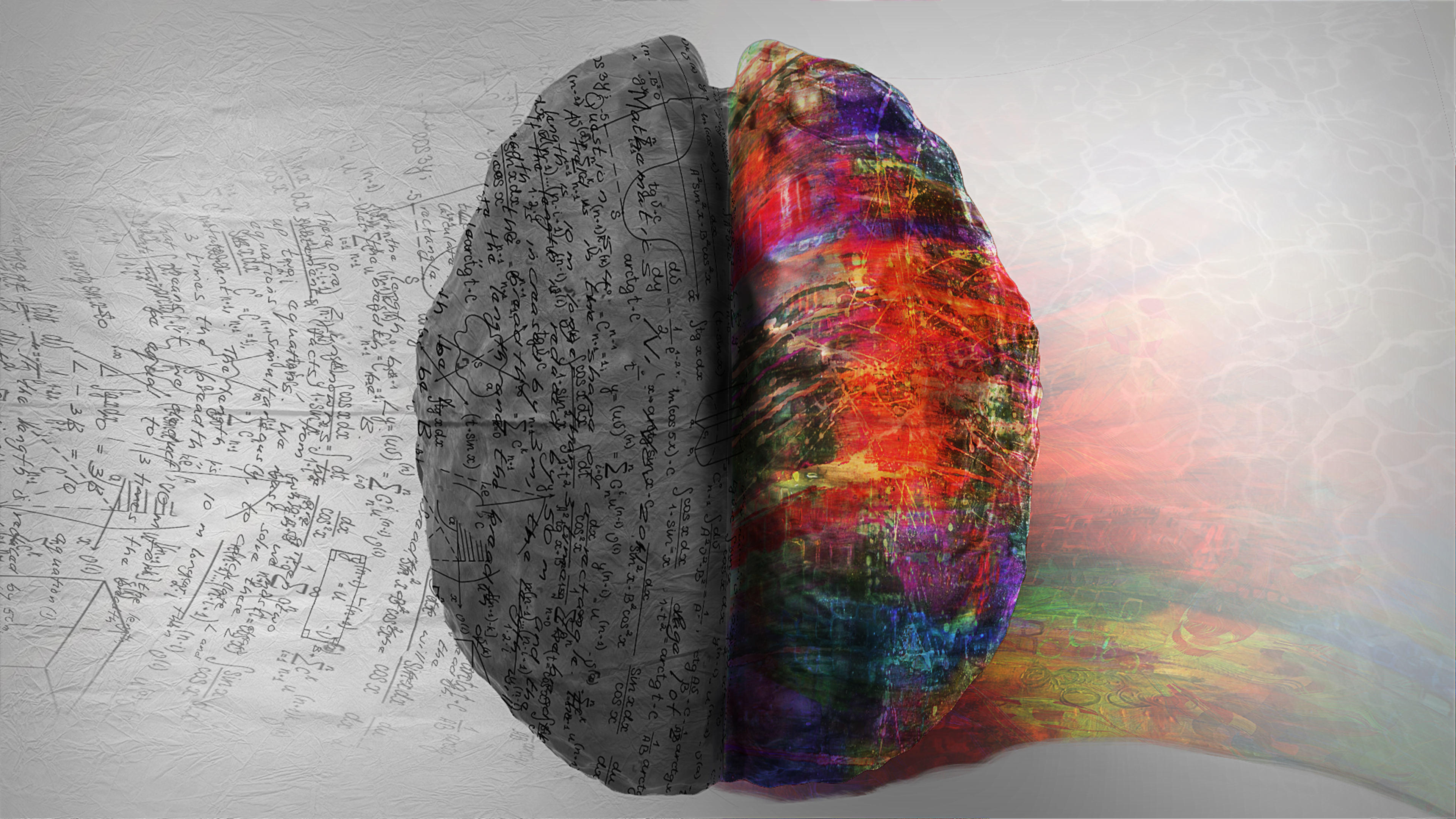 This blog was prompted by a recent article in Therapy Today by Robin Shohet (p30). In it, he voices his concerns that the work of therapy and therapists is increasingly being influenced by what he calls the ‘left-brain dominance in the zeitgeist’. As he says:

Thus, as the left brain begins to have more and more influence, we move into a world that becomes increasingly bureaucratic and mechanistic, and devalues the essence of therapeutic work, which is rooted fundamentally in relationship and connection. We move into a world of measurement and audit: of manualised treatments, measurable outcomes and evidence-based practice, and, as is the way of the left brain, anything other is dismissed as unscientific and therefore invalid.

He is right to be concerned, and he far from alone in this view, but I think it is possible to find an accommodation between these two seemingly conflicting worlds.

Left and right hemisphere experiences of our world

I’m no neuroscientist, but there seems to be a growing body of opinion that the left and right hemispheres of our brain display very different characteristics in how our world is experienced and represented.

These differences are expertly characterised by psychiatrist and writer Iain McGilchrist in his book The Master and His Emissary: The Divided Brain and the Making of the Western World. For a condensed version try his TED talk The divided brain. He describes the brain’s hemispheres as two whole, coherent, but incompatible ways of experiencing the world. Connected, yes, but more in the way of two neighbours with different cultural experiences and languages trying to communicate over the garden fence.

According to McGilchrist, the world of the left hemisphere is given to narrow, sharply focused attention to detail, a sustained, open, vigilant alertness, and precision. It provides us with a simplified version of reality that helps us to understand and act upon the things that matter to us.

In that sense, McGilchrist says, ‘it’s not reality, but it works better.’

By contrast the world of the right hemisphere is given to making connections with the world. It sees things in context, understands implicit meaning and metaphor, recognises body language and emotional expression in the face. It understands individuals, not just categories.

To what extent might these differences help to explain the seeming polarisation in therapy, between adherents of textbook, manualised therapies, and those more disposed to relationally based approaches? Put another way, does our ‘dominant’ hemisphere determine our preference for either medical/scientific or relational/contextual approaches and interpretations of what works in therapy?

We pay a price for polarised views

Over the past couple of decades, the environment in which therapy is delivered (save perhaps in private practice) has changed beyond recognition. Accountability, evidence based practice, outcomes based commissioning, and payment by results, to name but a few factors, have moved therapy ever further into a left hemisphere world.

Many of us have struggled with this shift. Many of us still do. Unlike psychologists, most of us were never schooled in the principles and practices of measuring outcome and impact. For some, they represent a fundamental threat to our practice and our profession. So much so, that in some cases we have closed our minds.

I believe that’s both mistaken and dangerous, in that it is a denial of part of the reality we find ourselves in. Because of our reluctance as a profession to engage and find some accommodation with this perceived threat, I believe we have paid a heavy price.

Reading Robin’s article led me to wonder how I manage to sit comfortably with the potential tensions of left/right approaches.

As a therapist, I practice integratively and intuitively. Nothing seems more alien to me than the thought of a manualised approach to my work with clients. Yet I also believe it’s important to be able to quantitively evidence my work, lest I fall into the trap of believing my own hype. 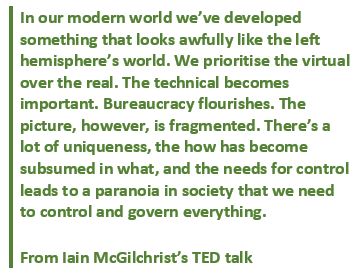 To paraphrase Thomas Jefferson, these are some of the truths that have come to be self-evident for me. They have evolved over the years, based on my experience of therapy, routine evaluation of practice, and a developing interest in what research shows works in therapy:

These are my truths. Contained in them are elements of both left and right brain. Whether or not you agree with me on any or all of them, I’d be delighted to hear yours.

I leave you with the words of Jerome Frank, writing in his book Persuasion and Healing [i], from 1991.

“My position is not that technique is irrelevant to outcome. Rather, I maintain that…… the success of all techniques depends on the patient’s sense of alliance with an actual or symbolic healer. This position implies that ideally therapists should select for each patient the therapy that accords, or can be brought to accord, with the patient’s personal characteristics and view of the problem. Also implied is that therapists should seek to learn as many approaches as they find congenial and convincing. Creating a good therapeutic match may involve both educating the patient about the therapist’s conceptual scheme and, if necessary, modifying the scheme to take into account the concepts the patient brings to therapy.”